With upper ridging largely dominating the Plains, it's looking very quiet today aside from isolated non-severe thunderstorms developing over the Rockies. Looks like better prospects over the Rockies on Tuesday, and more especially over the northern Plains on Wednesday, so today we'll amble north from our overnight stay at Raton (NM) up I-25 for 4.5 hours to spend the evening in Estes Park (CO), in the scenic Rockies. 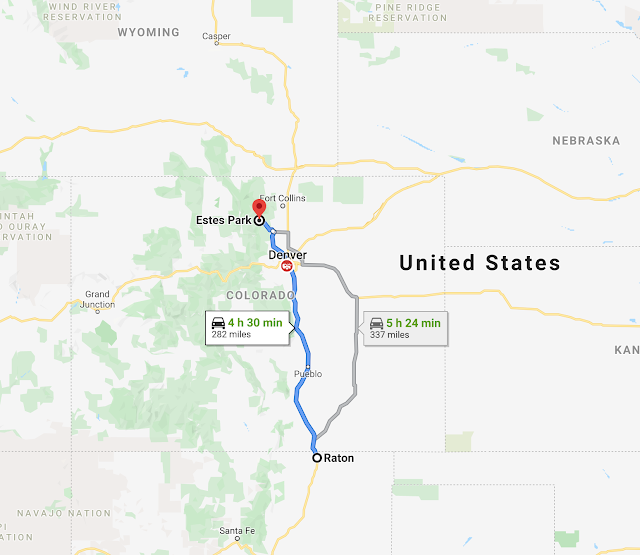 Needless to say, we're all gutted we can't be chasing in the U.S. Plains this year due to the health risk and heavily restricted travel worldwide as a result of the COVID-19 pandemic. Nonetheless, might as well chase 'virtually' to pass the time and see where we may have ended up each day during our chasecation.

Today we would in theory be waking up in Denver having landed yesterday evening, probably up quite early due to jet lag. After spending the morning in Walmart stocking up on water and snacks, and making sure our mobile internet works and is all up and running, looks like we would have a 2-3 hour drive south along I-25, next to the stunning Rockies to our right, in the general direction of Raton.

A few thunderstorms are expected to fire over the high terrain in southern Colorado and northern New Mexico this afternoon, generally non-severe but may produce some marginally-severe hail as they drift away from the mountains and over the open plains. Nothing desperately exciting expected, but a quiet, relaxed chase to ease us into the holiday. 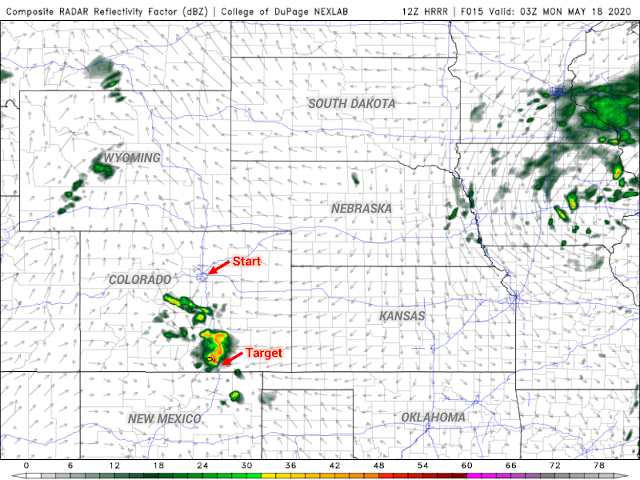 As the trip comes to an end, we decided to rest today and visit Dave Ewoldt in Okarche (OK) for the evening. After a 4 hour drive from Guymon (OK), we rocked up at his house as pop-up thunderstorms were beginning to fire overhead - in fact they lasted for nearly 2 hours with continuous rumbling of thunder and very heavy rain which caused the street outside to flood. Eventually it eased off in time for steaks to go on the BBQ!

Not a huge amount to report today - after lunching in Guymon (OK) we nudged west to Boise City (OK) then north to Springfield (CO) to watch a few marginally-severe storms develop to our west and move slowly towards us. Lightning wasn't particularly frequent, so after a couple of hours parked up listening to thunder and crickets, we gradually headed back to Guymon (OK) for the night, pausing on the way home to watch a gustnado spin in a field next to us. We also sat outside the hotel late evening to watch a storm flashing away to our south - so we've seen lightning every day except one during this trip.
This was likely our last chase day, as we have a couple of days left with very little organised storm activity forecast before we fly back to the UK at the end of the week.
Posted by Dan Holley at 22:56 No comments:

From our hotel in Hobbs (NM) we headed north to Boise City (OK), after lunching in Dalhart (TX). Storms were forecast to fire over the Raton Mesa and head east across NE New Mexico and SE Colorado, eventually pushing into SW Kansas and the Oklahoma Panhandle.
A line of thunderstorms developed to our north and west, and became marginally-severe in a rather pulse-like fashion. We opted to head towards the cell on the southern end of this line, to the west of Clayton (NM) - which en-route became tornado warned, but never produced.
The cells kept pulsing and back-building so we sat with this line for most of the afternoon, ambling a little north and west at times, listening to the sounds of constant thunder and crickets.
Eventually we headed back east through Clayton (NM) to follow the line of storms as it moved across the Oklahoma Panhandle. We had to drive through one of the storms at one point, which was producing an impressive amount of CG (cloud-to-ground) lightning, before reaching our hotel for the night in Guymon (OK).

Another day in New Mexico - starting in Clovis (NM) we nudged southwest to Roswell (NM) to have some lunch. By this stage a thunderstorm had already fired over the mountains to the west, and was moving slowly eastwards. We dropped south then west to park up and watch the storm moving closer to us, with a rapidly rotating wall cloud - it was close to dropping a tornado, but quickly became rain-wrapped and from thereon the storm became a HP (high precipitation) beast. Nonetheless, it became tornado-warned for a time.

Road options were somewhat few and far between, so we jogged southeast to Artesia (NM), then east through 32 miles of roadworks (yet again to widen the road for the oil boom in W Texas / SE New Mexico) to Maljamar (NM). By this stage a couple of new storms had fired, one directly in front of us to the north, and another some 40 miles back to the west. We sat for a while watching the various storms in front of us, neither looking particularly impressive. That said, some stunning iridescence was seen in the anvil as the low-angle sun shone through.
Eventually we decided to have a closer look at the storm to our west, and as we got closer it revealed an amazing shelf cloud, which then chased us southeast - pausing to look a few times - all the way to Hobbs (NM) where we had dinner with Paul Knightley and Helen Rossington.


At long last it was time to escape SW Texas - the area has changed quite a bit since I was last down here a couple of years ago. Oil is a big thing, and the volume of tankers, oil fields, roadworks (to make the roads wider for tankers) and new electricity pylons is astonishing. They've even erected some makeshift towns, primarily out of caravans and mobile homes, for all the oil workers to live in. This is not ideal chasing territory.

I digress; instead we headed north into New Mexico, ate some lunch in Carlsbad (NM) and dropped north to Artesia (NM) then west to Hope (NM) to watch a couple of developing supercells to our south and west. The interesting thing about today was how each storm appeared to be moving in different directions to each other - a whole plethora of left- and right-moving supercells, crossing in front of each other, pulsing up and down. While we were watching one to our southwest, a left-mover rapidly approached us from the south - to the point that we had to make a quick escape to avoid it's hail core!
We parked up west of Lovington (NM) for several hours and watched several supercells pass us by, in all directions. As the sun began to set a left-moving supercell to our west, then north, intensified quite a bit and for a time became tornado-warned. The base looked pretty high, but I saw a report from another chaser on the other side of the storm that there may have been an anticyclonic funnel extending 2/3 of the way down to the ground. We then followed these storms north from Lovington to our hotel for the night in Clovis (NM).


All in all, not a bad chase day - though a little bit more flow aloft may help these storms maintain their structure a bit more. The pattern is rather weak and faffy at the moment, and unlikely to change a great deal for the remainder of the trip. It may become more active in the northern Plains late next week (Wyoming, Dakotas, Montana etc) but we'll be back in the UK by then...