Starting the day at Wichita Falls (TX), we initially drove to Amarillo (TX) to grab a bite to eat, and to assess the situation. We started to feel a little nervous that we were located a little too far west, so we drifted southwestwards towards Clovis (NM), just over the border into New Mexico.

Once we'd had a proper look at the latest data, and we had restarted the car using some jump leads provided by a very kind local, we headed towards a developing thunderstorm west of House (NM). Initially only the anvil top was visible, but as we neared it the full structure became apparent.
By now the anvil had started dropping a few CGs nearby, and you could hear the suspended power lines ahead starting to buzz more frequently. We wanted to get some better pictures of the stom's structure, so we decided to head south towards Melrose to gain some distance between us and the ever-approaching storm. 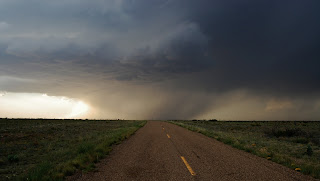 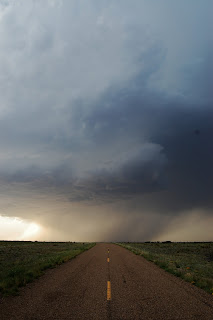 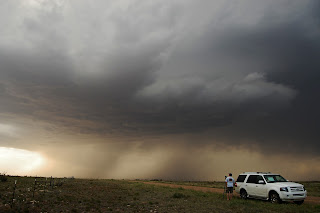 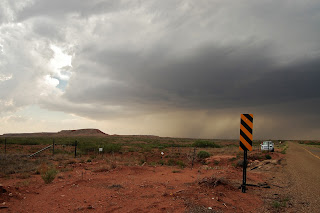 Since the storm was moving slowly southeastwards, we had to get ahead of it to get a nice view of the structure, so we headed south of Melrose along a dirt track...
To our west we were treated to a spectacular sunset...

...while to the south was a nice long line of distant anvils, lit up by the setting sun:

As the storm continued to rotate, some magnificent mammatus rapidly formed in the mid and upper portions, and on the anvil, while a new updraft forming on the northwestern flank began to form a funnel cloud for a short period of time.
Darkness began to fell and the supercell really started to kick out frequent lightning with several CGs from the new updraft tower. 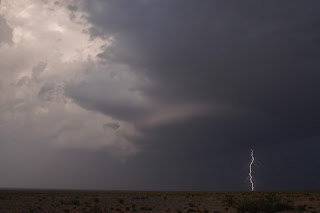 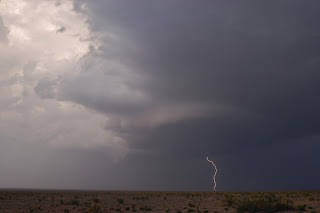 The road network in this part of New Mexico are pretty poor, so we had to drive to the northern side of the storm in order to keep up with it - by this stage it had passed through Melrose, leaving a carpet of sizable hail on the ground. The storm began to show indications on doppler radar of a potential tornado, and as a result the National Weather Service issued a tornado warning for the thunderstorm as it moved across Floyd (NM) and later Dora (NM).

We waited a few miles west of Dora while the core of the storm passed over the small town, with the sound of distant tornado sirens being carried on the wind.Once they had ceased we drove into Dora, and the western side of the town was covered in golf ball sized hail, with some minor damage done to trees and streetlights visible. Also worth bearing in mind that the hail would've had 10-15mins worth of melting before we arrived, so they were quite likely initially larger than when we came across them. There was also some flooding in central parts of the town, and reports of a rain-wrapped tornado.
There is something quite strange about hailstones of this size (or larger) falling into surface temperatures in the 80-90s F (27-32C) - it just goes to show how powerful the atmosphere can be...