Starting today in Fort Collins (CO) where it is currently 27C at time of writing, having reached the hotel here late yesterday evening. En-route from NM to CO yesterday we noticed the air con wasn't working properly, making the car quickly become more like a greenhouse. After phoning the rental car company and organising to swap for a replacement at Denver airport, we then had a 3 hour drive in a very hot car - but all is good, as we are now the owners of a Dodge Durango. Need a new name now (reg ends in TTT).

There was some nice convection developing over the Rockies to our west on the journey north yesterday afternoon/evening - proof that upslope flow/orographic forcing can induce convection!

Had originally planned to drive north to Gillette (WY) today to get closer to the risk area for tomorrow, but having looked at various output this morning think we'll try and see what NE Colorado can produce - chance of a couple of severe thunderstorms with hail and gusty winds, and a low risk of a short-lived tornado. Being in the post-frontal environment, the surface air is quite dry with ridging building from the west aloft, so any storms that do develop will likely be pretty well-scattered. Either way, we've got a lengthy drive tomorrow morning to get into position for the afternoon...

A cold front has moved south through northern TX, placing the majority of the Plains in a colder, drier surface airmass. Indeed, it was just 13C in Amarillo (TX) this morning, which felt decidedly chilly! An upper ridge is currently moving across the western seaboard, and this will translate eastwards across the southern Plains by early part of next week, bringing some dry but much warmer or hotter conditions to the likes of Texas and Oklahoma etc, and more crucially some well-needed respite after what has been the wettest May on record for many parts of TX and OK. Hopefully things will start to dry up a bit here as there is a lot of flooding in parts of TX at the moment (after 4 years of severe drought).

With the jet displaced much farther north, the focus for any severe thunderstorms will largely be across the northern Plains where the upper flow is more zonal with small-scale impulses running eastwards in the broad westerly flow. As a result, it seems much of next week's chasing will be across the northern Plains, and so we are treating both today and tomorrow (Sunday) as 'positioning days', travelling the 800-900 miles or so to get into position for Monday onwards. Aiming to spend tonight somewhere in/near the Denver (CO) area and will assess tomorrow morning where to aim for by tomorrow night.

Left Dalhart (TX) after a refuel and some lunch, and headed west to dip our toe across the border into New Mexico. A couple of storms had already fired by early afternoon, one 70 miles to our north west, the other some 50 miles to our south west. After some deliberation, we committed to the northern cell (quite often you'd chose the southernmost cell, but preferred the look of the northern cell and it had some reasonable distance between it and the next one to keep a fairly strong inflow).

Roads are quite limited in New Mexico, with long stretches of road before you can turn off and change direction. Mobile internet coverage is also rather non-existent away from the far east of NM, and so we were chasing with no fresh data for over 2 hours. Nonetheless, our cell split into two at one point and cycled between being very outflow dominant to producing some nice tight circulating mesocyclones at times with attempts to produce a lowering wall cloud. There were some nice hail/rain curtains at times also.


We chased this storm rather erratically southwards, knowing that most other storms had already formed a fairly coherent line to our east, and to get to Amarillo (TX) we would need to drive through these storms to get to the other side. Luckily most of these were not severe, and so the car received a good wash from the heavy rain, with quite a bit of frequent lightning as we drove back along I-40 west of Amarillo (TX). Frustratingly some 100 miles farther south, one of the storms on the leading edge of this line produced a stunning short-lived (4 minutes) tornado from a very high base on the TX/NM border west of Levelland (TX).

Now spending yet another night in Amarillo (TX), and watched the line of storms come back over us with frequent lightning and heavy rain for a time this evening. Chance of some marginally severe storms perhaps in New Mexico again tomorrow, but a fairly low chance, and probably our last chance at anything decent until it restarts again but in the northern Plains early next week...

Starting in Amarillo (TX), lots of sunshine this morning across the TX panhandle so should help in increasing surface temperatures. A lot of anvil high cloud towards the border with W OK from a storm complex currently across eastern OK, but temperatures already into the low 70s F and dewpoints in the low/mid 50s F (so low 20s Celsius and 10-14C respectively). Initiation looks likely across E/NE New Mexico during the early/mid afternoon, with further storms developing downstream through eastern NM and eventually moving into W TX panhandle, before merging into a line of potential severe storms this evening. Chance of a tornado, but quite low with fairly dry surface air over New Mexico, and so storm bases will be quite high to start. However, given more sunshine today compared with yesterday, feeling a little more hopeful of seeing a decent thunderstorm if nothing else.


Once storms merge into more organised line this evening the main severe risks will probably shift to strong outflow winds and small hail. Best chances of larger hail and perhaps a tornado with any more discrete cells this afternoon.

Current thoughts are to head to Dalhart (TX) with reasonably good road options and grab some lunch while reassessing how things look then. Certainly plausible we'll end up chasing SEwards back towards Amarillo, so perhaps a 3rd night in Ama? We'll see... 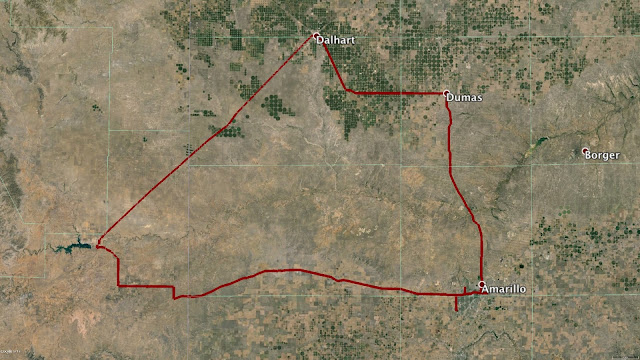 So far we've spent most of the morning in the Verizon store at Amarillo (TX) as our endless quest to try and get our mifi unit to work continues, after the fun with AT&T yesterday meant we just missed out on the significant tornado near Canadian (TX). Finally we've got all internet devices working, so we can properly begin the storm chase now!

A bite to eat in McDonalds (tally now up to 3), with mammatus overhead, and an analysis of the weather situation. A real mess to our south with thunderstorms developing quite widely, in an environment favourable for large hail and perhaps a few tornadoes. The anvil has spread out miles away from the storms, and hence it is cloudy here in Amarillo (with mammatus on the underside of the anvil) despite being some considerable distance away from any storms. We'd have to drive 160 miles to the south to get ahead of these storms, core-punching them along the way.

Alternatively, we've been keeping an eye of cumulus developing in the sunnier skies towards the NM border and far NW panhandle of TX, which is just starting to develop into a couple of thunderstorms. Current thinking is to drift west a bit towards NM and see what happens. Hopes aren't particularly high today given the cooler surface airmass here, probability of a tornado is lower but hopefully a nice thunderstorm may develop that we can chase into the TX panhandle...

Hello! After the best part of 24 hours travelling, we have finally landed in Oklahoma! Spending the night in a hotel just north of Will Rogers airport, having picked up the beast that is our hire car. No name as of yet, any suggestions welcome (the registration ends in LJR if that helps). Now watching a storm off to the northwest of the OKC metro flashing away, so with lightning on Day 1 I'd say it's been a reasonably successful day!