We left Amarillo (TX) from our overnight stay and headed north for 4 hours with a target of Syracuse (KS). Took a few hours for initiation to take place, but eventually a few storms formed (near 4-5pm) along the dryline close to the KS/CO border and drifted NE. They were messy for the first hour or so, but eventually the southernmost cell (which went up pretty much overhead) became better organised and slowed it's forward motion.

As we nudged north of Marienthal (KS) this storm, now a supercell, dropped 2 very brief (5-10 seconds) tornadoes, before splitting. The new southern supercell then became better organised once again, drifting to the NE at only 5mph, and eventually dropped another brief tornado.

As the sun began to set, this supercell took on some incredible structure, especially when backlit by the setting sun, with a lot of lightning flashing around. Tennis ball sized hail was reported with this storm, but the hail core stayed to our W/NW.

We left the storm as it was getting dark and headed south to book a hotel for the night in Garden City (KS). 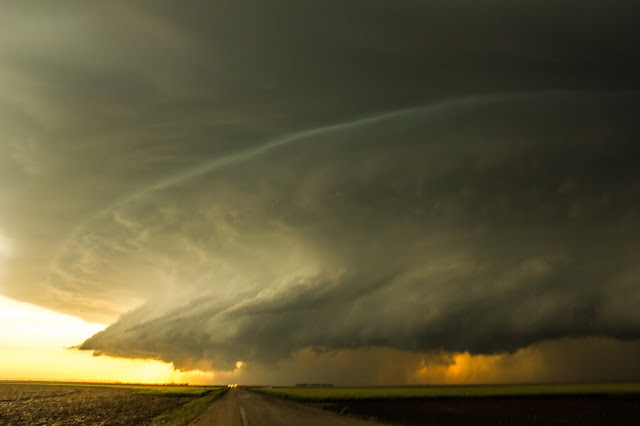