The run of frustrating days continue! We targeted Woodward (OK) for lunch then nudged northwest to sit at May (OK) for a couple of hours waiting for initiation. It was a big tornado-type day, had lots of potential, and hence practically every chaser was in the area, poised ready to pounce on the first supercell of the day. For that reason, once storms began to fire, we chose a supercell near Liberal (KS) instead of Dodge City (KS) in the hope that the roads would be quieter but we might still see a tornado.

However, despite this storm being tornado-warned multiple times, it never produced. Meanwhile I could see the amazing hook echo of the Dodge City storm on radar, and photos started filtering in of tornado after tornado, so we ditched our storm and raced northeast to try and get onto the Dodge City storm, that was riding an outflow boundary. As we approached we could see a tornado in the distance on the left side of the large wall cloud, and then this lifted and a new one formed on the right side. But a new storm was going up overhead with a lot of CG lightning nearby, so we had to head east to get out of this storm and by this stage everything had become rather messy with storms popping up all over the place.

We hung about through the evening hoping we might catch a tornadic circulation on one of the storms, but eventually gave up and drove to our hotel in Alva (OK) for the night. So despite feeling disappointed that we could've gone straight to Dodge City and seen the whole event, we did still see 2 tornadoes in the evening before the storm died. And Dodge City was very fortunate that the tornadoes stayed to the west of downtown... 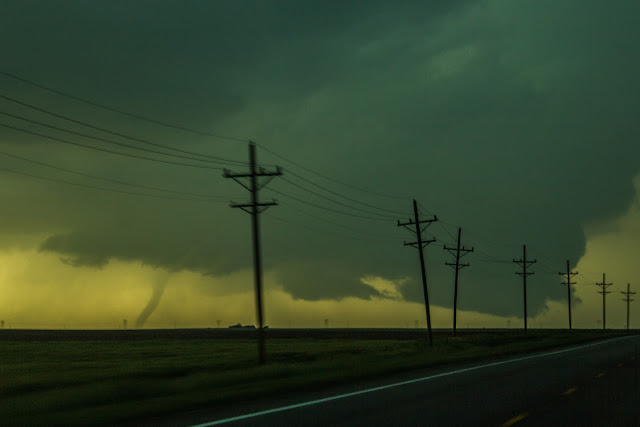 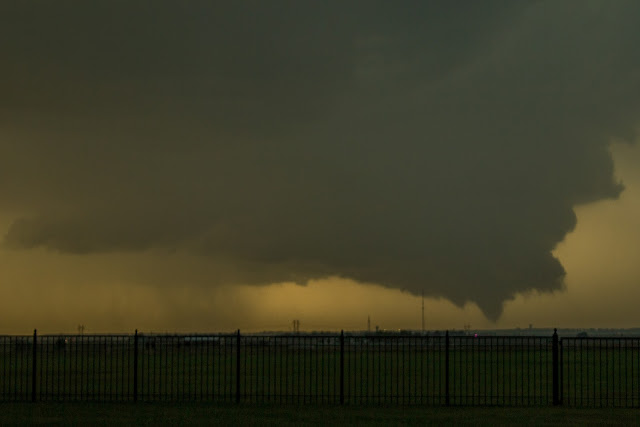