A little disappointing today given the hype from various sources. It was tricky trying to find a starting location, since overnight the majority of models indicated the best conditions for tornadic supercells had shifted further south from the Kansas/Nebraska border to south central Kansas, or even northern Oklahoma. Consequently, we made an early start from North Platte (NE) with an initial destination of Minneola (KS), ETA near 12:30pm - several hours before anything was due to develop.

We arrived in Minneola (KS) on schedule, and waited a couple of hours in a derelict petrol station forecourt for things to kick off. The low cloud, mist and drizzle of the morning had finally dissipated, leaving clear blue sky and strong sunshine. We could see the beginnings of cumulus attempting to develop to our W/NW, presumably along the dryline. Mesoscale Analysis indicated we were sitting in an environment with nearly 5,000 J/kg CAPE, but conversely it remained heavily capped for the time being. Cumulus began to try some more vertical development, but kept being shredded and sheared off to the northeast.

We knew we need to keep close to or just ahead of the dryline, which was slowly encroaching from the west, so near 3pm we decided to nudge a little further east to keep ahead of this cumulus development. We parked up in Bucklin (KS) and kept a close eye on the sky, the cumulus starting to tower more and looked more promising...

Storms began to fire off in central parts of Kansas, northeast of Garden City and heading northeastwards. We wanted to keep on the 'potential' southern cells, so nudged further east once more and settled at Greensburg (KS), a town destroyed by an EF5 tornado on 4th May 2007. It was clear a lot of other chasers had a similar idea, you could see them parked across the town, and at least 20 chasers were dotted about on Spotter Network.

A storm developed near Bucklin (KS), heading slowly northeast, but looked poorly-organised on radar. Some chasers went after this, but a lot stayed put in Greensburg (KS). There was a cluster of storms over northern Oklahoma about to cross the border into Kansas, so we decided to head south towards Coldwater (KS) and chase these, hoping that since these were the southernmost cells then they'd have the best inflow. We found a large cluster of chasers at a crossroads just south of Coldwater (KS), observing the now line of thunderstorms off to the west and southwest, constantly flashing away with lightning. These weren't looking that promising for tornadic development sadly, and we decided that the best potential for this would be on the southern end of this line of storms.
The road network either took us west straight into the storms (with large hail) or south for quite some way to enable us to get onto the southernmost cell. We took the south route into Oklahoma, then east towards Buffalo (OK), and then back north on 183 towards Protection (KS). We were getting into the rain at this stage, and started to get some small hail fall on the car... I decided to pull over and let the main core cross the road in front of us, to avoid any of the hail getting larger and damaging the car. There was plenty of lightning with this complex, but it didn't look brilliant for any tornadic development sadly.

Once the storm had crossed the road we drove quickly north on 183, the road surface was very poor (in the process of being relaid) and there was a lot of surface water on our side of the road, making it very difficult to drive straight. The storms were already beginning to line out into an MCV, and we could see that two discrete supercells near Hays in central Kansas had already produced tornadoes - we were very gutted deep down that we didn't head north from Greensburg (KS), but these storms were really too far away to be chasing after now, especially seeing as all of these individual cells were now beginning to form one massive line down the entire width of Kansas.

We knew our best hope of seeing anything interesting would be with the southern cell on this line, with the best inflow, but we were currently west of the line (which was travelling eastwards), and at some point we would have to plough straight through the line of storms in order to get ahead of it. At the same time we were running out of fuel, so we drove quickly north back to Bucklin (KS) then east to Greensburg (KS) where we fuelled up, then dropped back south to Coldwater (KS) - talk about going round in circles!

By this stage in the evening (near 8pm) it was becoming clear that we'd missed our chance of a tornado today, and while still behind the line of storms to the east we enjoyed a lot of anvil mammatus being lit up by the setting sun, while also producing some powerful positive lightning at times. Matt had a flight to catch from DFW the following day (19th May) so it made sense to complete half the journey to Dallas this evening such that it wasn't such a mad rush the following day. I decided to head to Oklahoma City as a destination for our overnight stay - this involved driving through this line of thunderstorms to get ahead of it. We did so, it was a difficult period of driving with very heavy rain, frequent lightning but thankfully no hail! 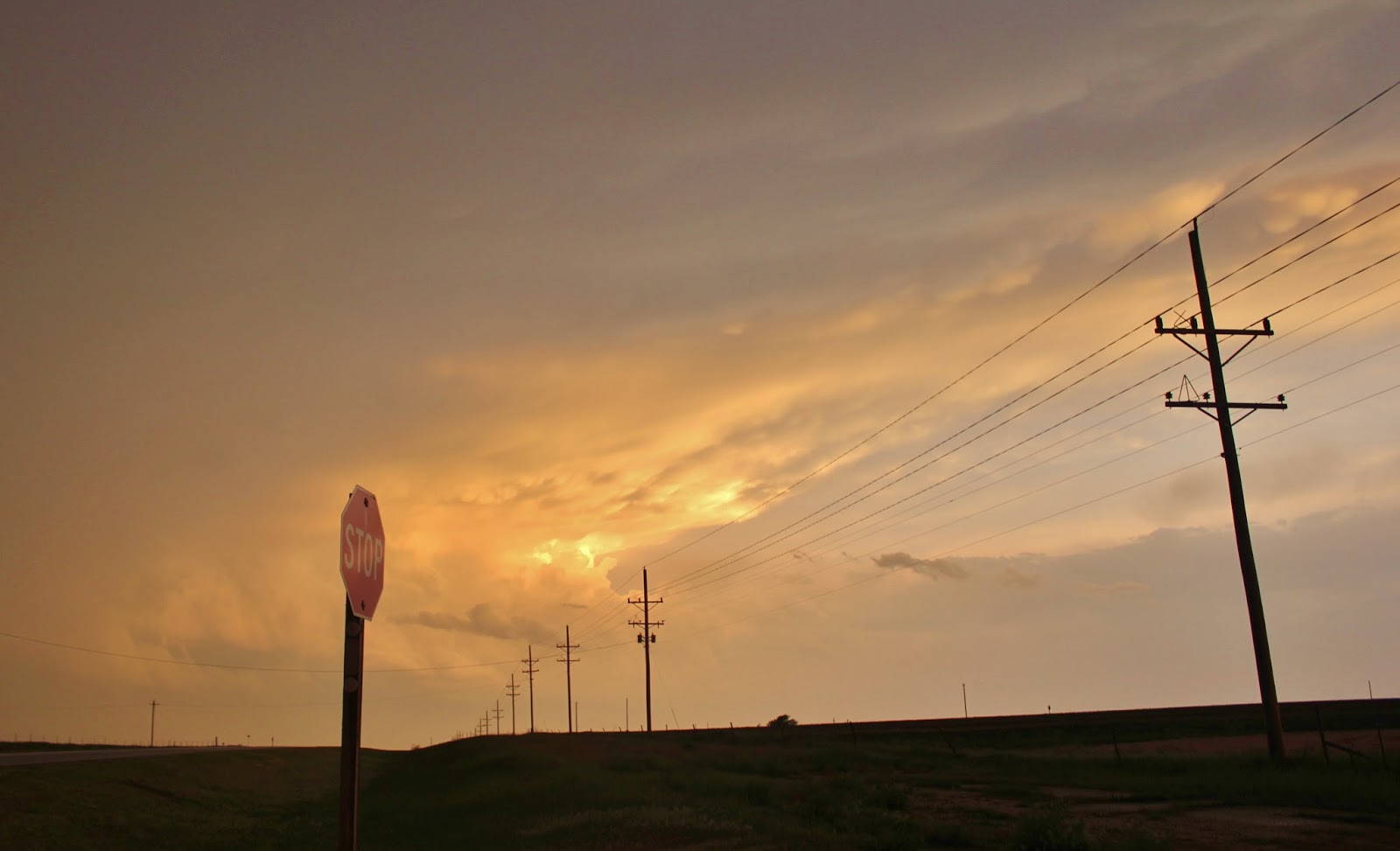 We headed east through Medicine Lodge (KS), Anthony (KS) and Wellington (KS), before joining the I-35 and heading south across the border into Oklahoma. It was here that the car was being buffeted by incredibly strong sidewinds from the west, and I found it very difficult to keep the vehicle in lane. Very surreal experience, no rain or lightning, just incredibly strong winds. As we neared Oklahoma City the winds began to ease a little, but instead we ploughed through a cluster of thunderstorms on the northern edge of the city. By now it was getting close to 1am and we were all very tired - in fact half the car had been asleep for several hours while I had been driving!

The next tricky bit was finding a hotel that had a room available! It turned out that a lot of southern Oklahoma City had powercuts from the earlier thunderstorms, so everyone had swarmed into northern areas for hotels, including a significant amount of storm chasers. We lost count as to how many hotels we had stopped and asked at, but eventually near 2am we finally found one with a vacant room in Edmond - hurray! Needless to say we all fell asleep very quickly after what had been a very tiring (and disappointing) day...

NB: In hindsight we should've stopped in Dodge City (KS) at lunchtime and eaten some food - we hardly ate anything all day! We could've also headed north after the tornadic supercells instead of the mess further south. But that's easier said than done knowing we had to drop Matt off at an airport the next day...
Posted by Dan Holley at 23:11