The day dawned rather cloudy and dull over the DFW metroplex. Myself and Matt spent most of the morning at the hotel, waiting for the rest of the crew (Chris, Chris and Todd) to pick us up. Eventually a cell developed just to the south of the hotel, producing one CG and a few good rumbles of thunder - before we had even started the chase officially!

Once we'd been picked up, the five of us travelled west towards Abilene where some decent thunderstorms were starting to form over W-C Texas. Near Abilene we took the 83/84 south towards Coleman, chasing a storm to our west that was developing a nice inflow notch, and was subsequently tornado warned. There was evidence of a wall cloud trying to form, with a lot of rotating low-level scud, but alas the storm failed to produce any visible funnel. 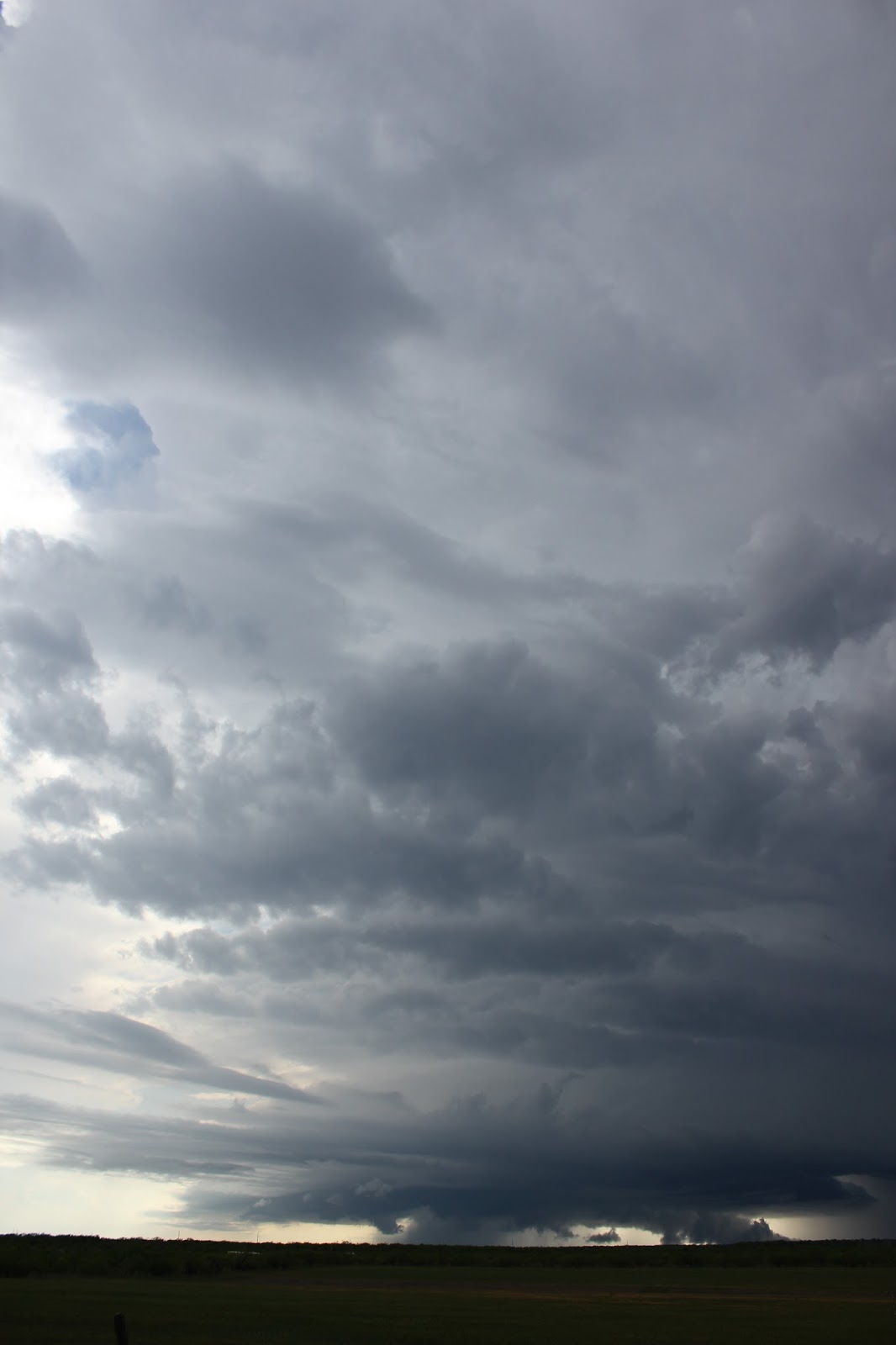 A second storm was forming quite well to the southwest, but eventually the net effect was that this second storm had a much better inflow and killed off the previously tornado-warned storm. We headed quickly south to catch up with the second supercell, which had already produced hail up to 2.75in (9cm) over areas near Ballanger (TX). 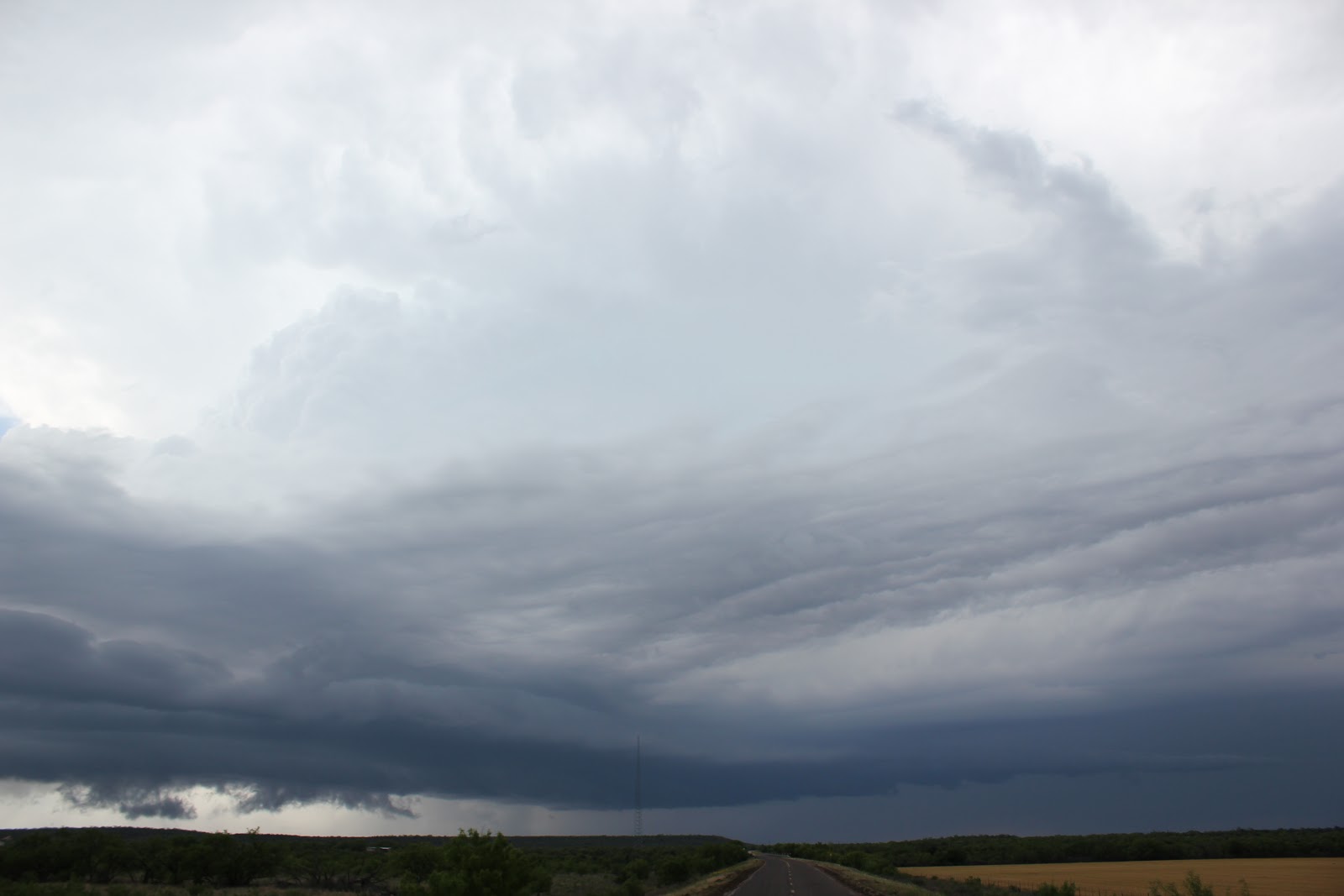 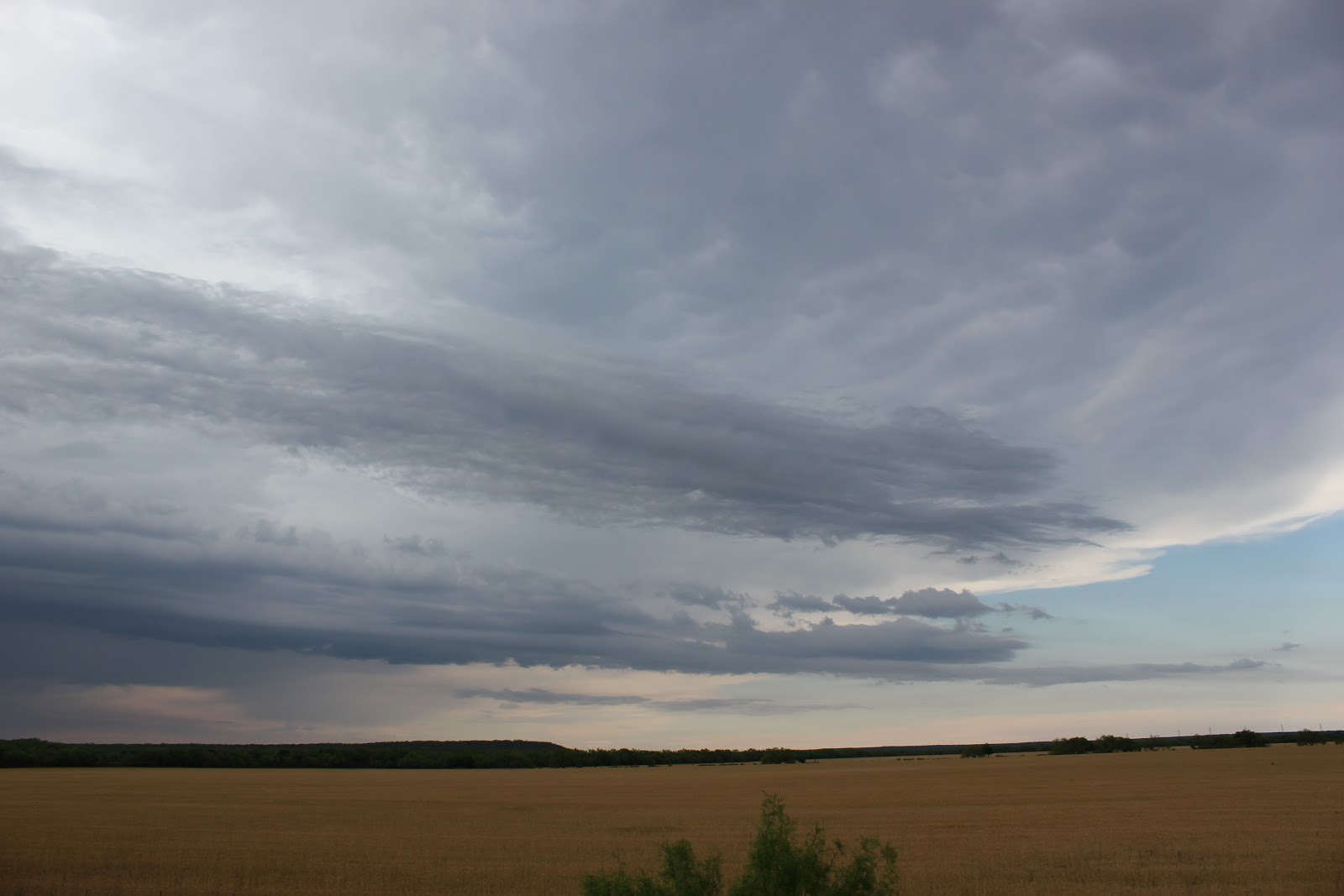 We continued to chase this storm southwards and eastwards, staying ahead of the main hail core to avoid damage to our chase vehicle (aka Chris' mom's car). We tried desperately to find a safe place to park the car and let the storm pass over us, to witness the large hail it was previously producing, but yet again a new storm developing way to the southwest was cutting the inflow off and the storm rapidly became outflow dominant and decayed in a short space of time - plenty of rain, some lightning but sadly no hail.
It was at the stage that we began to realise the nearest town was 30 miles away and the chase vehicle was indicating the tank of fuel would only last 40 miles - uncertain as to how accurate this gauge was, we decided to head quickly south towards Brady (TX), conveniently in the same direction as the new supercell was located.

We quickly filled with gas and headed south, passing through the western fringe of this new supercell just north of Mason (TX). Once we were ahead of the storm, we stopped on several occasions to observe the progress of the storm advancing towards us. This supercell began to develop a nice inflow notch, and was already producing baseball-sized hail in places. The cell eventually became tornado warned, which made us feel slightly nervous given our position, so we tried several times to find a safe canopy or awning to shelter the car underneath to avoid any significant hail damage. 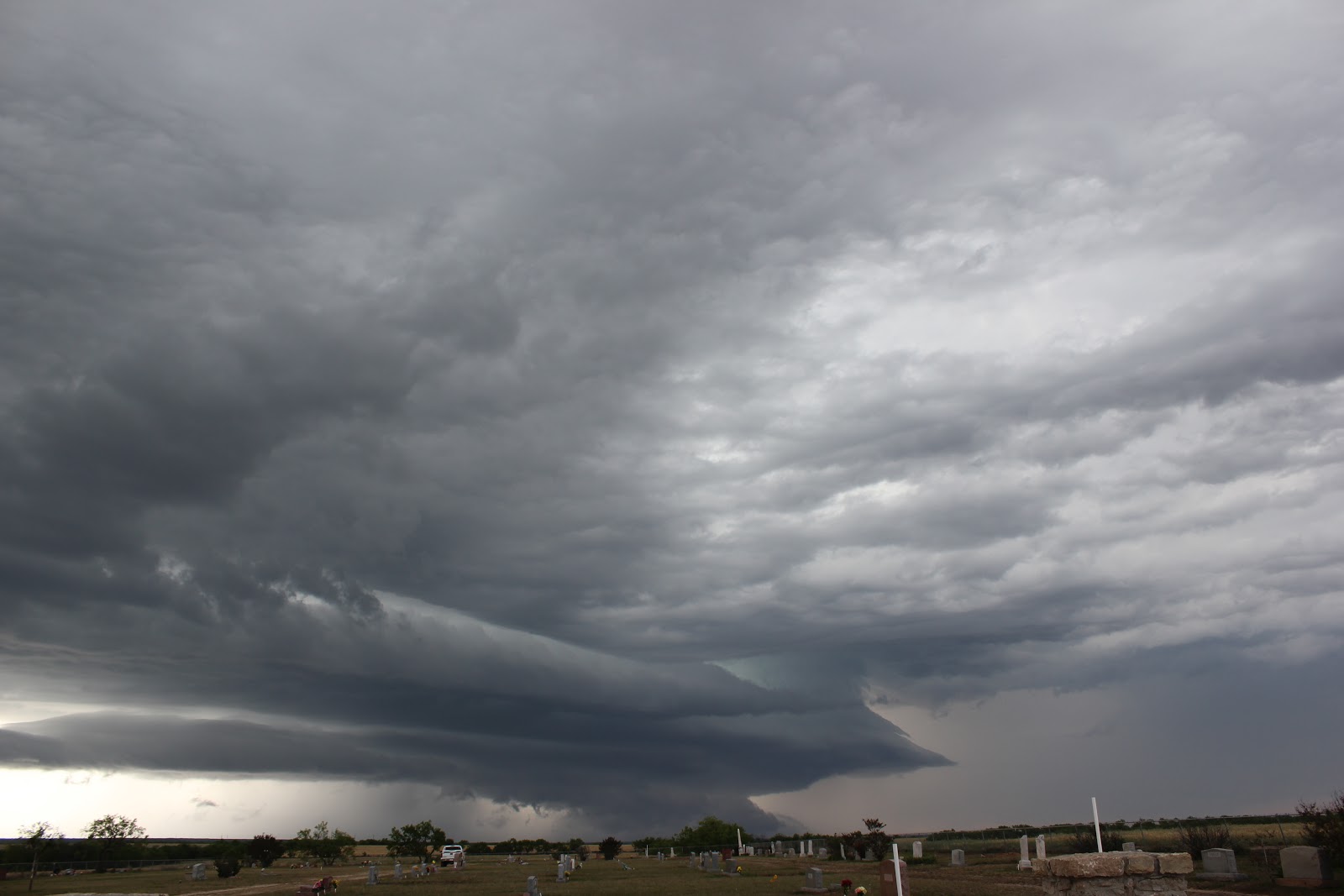 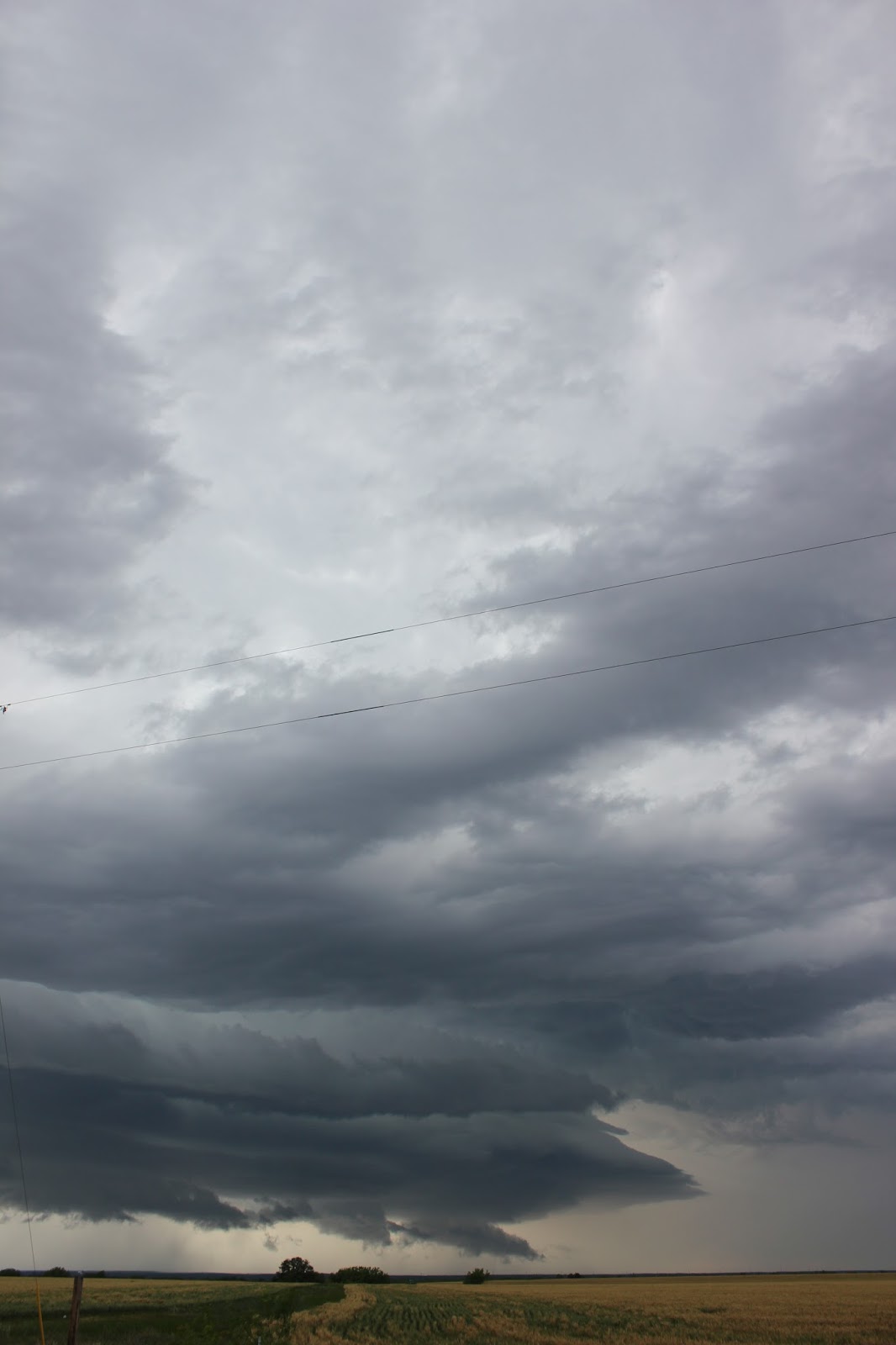 Fortunately we came across a hotel awning on the northern edge of Fredericksburg (TX), and decided to shelter under there with a handful of other vehicles. Soon after the storm arrived, winds picked up and were initially northwesterly, but quickly changed easterly and blew rain horizontally. Near 9.20pm we started to get some sizeable hail falling, which apparently smashed some guy's windscreen. We let the core of the storm pass over us, still nervous given the fact it was still tornado-warned, before heading southwest towards Kerrville (TX) to spend the night at a hotel.
Posted by Dan Holley at 13:53