We were rudely awoken in our hotel around 6am by an almighty crack of thunder, and shortly afterwards very heavy rain, frequent lightning and some small hail as an isolated but potent thunderstorm moved right across Kerrville (TX). Things got a little worrying for a short time as the falling hail started to get a little larger, but thankfully no damage was found to the chase vehicle.

Otherwise we were reasonably happy with our starting location within the SPC's SLGT area (accompanied by 2% probability of a tornado), so we made the most of a lie-in and then spent a few hours in McDonald's keeping a keen eye on the latest radar and ground observations.

Come mid-afternoon we felt the need to head further south as a series of thunderstorms were forming over northern Mexico and heading east across the border into southern Texas. We headed towards Rocksprings (TX) where we had planned to stop and reassess the storm situation, but unfortunately en-route our rear left tyre became bust, and we had to stop on the side of the road to change to our spare tyre.

Having unloaded the entire contents of the vehicle onto the grass verge, and spent some considerable time trying to jack the car up, it became clear that because the road was sloping to the right, we were never going to get the car high enough to replace the tyres. Several vehicles passed us and stopped to ask if we needed help, and they informed us that there was a garage run by 'Ray' in Rocksprings (TX) where we could get the tyre replaced.
We decided to risk it and drove slowly towards Rocksprings (TX), where we eventually found Ray's garage. It turned out that we had been driving with a wheel that wasn't actually screwed on, as we had forgotten to tighten the screws back on!! Nevertheless, Ray's team soon swapped our bust tyre for our replacement, and pumped it up for us - all for $12. Meanwhile a rather weak and high-based storm was approaching us from the west, but nothing too exciting with this fella. 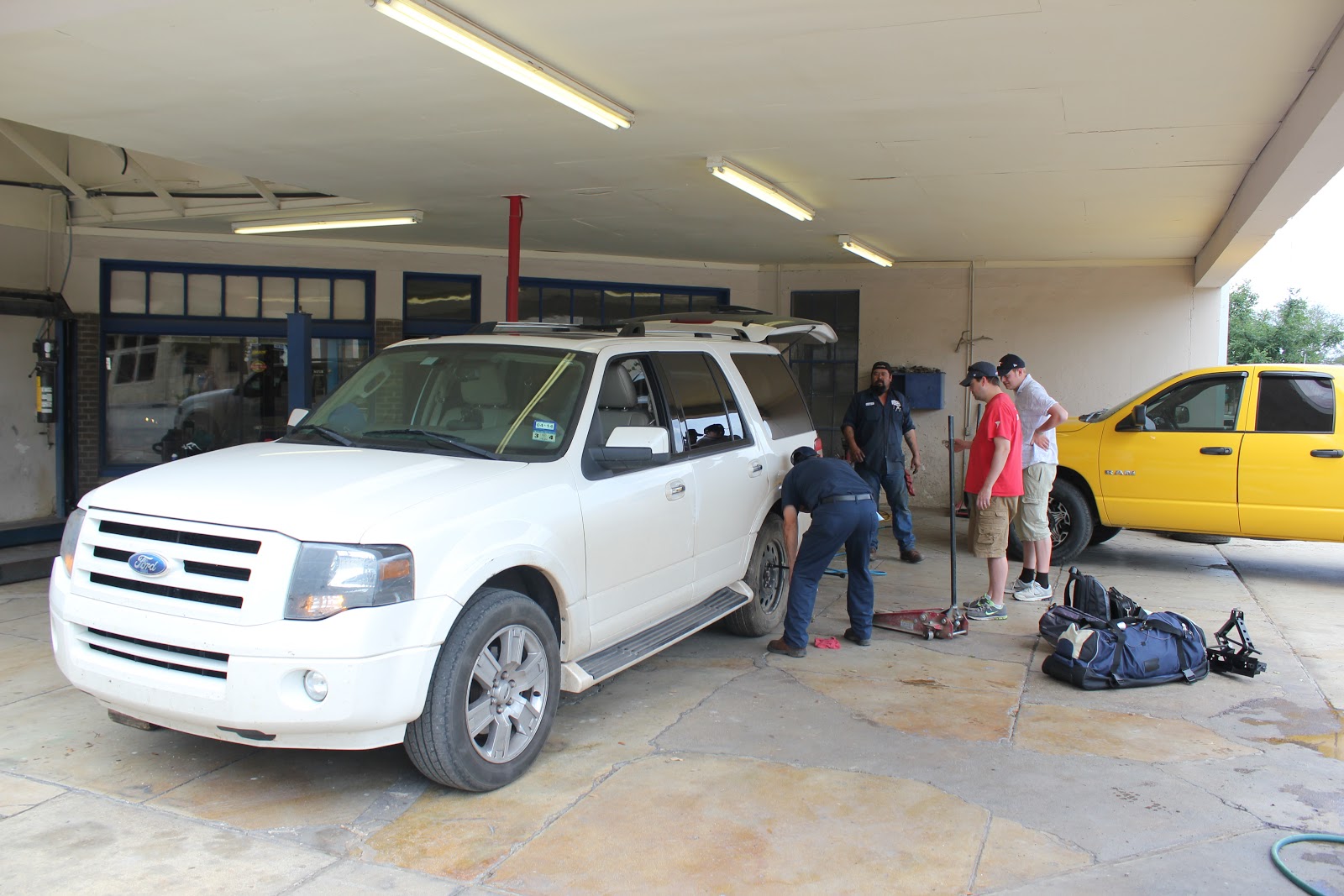 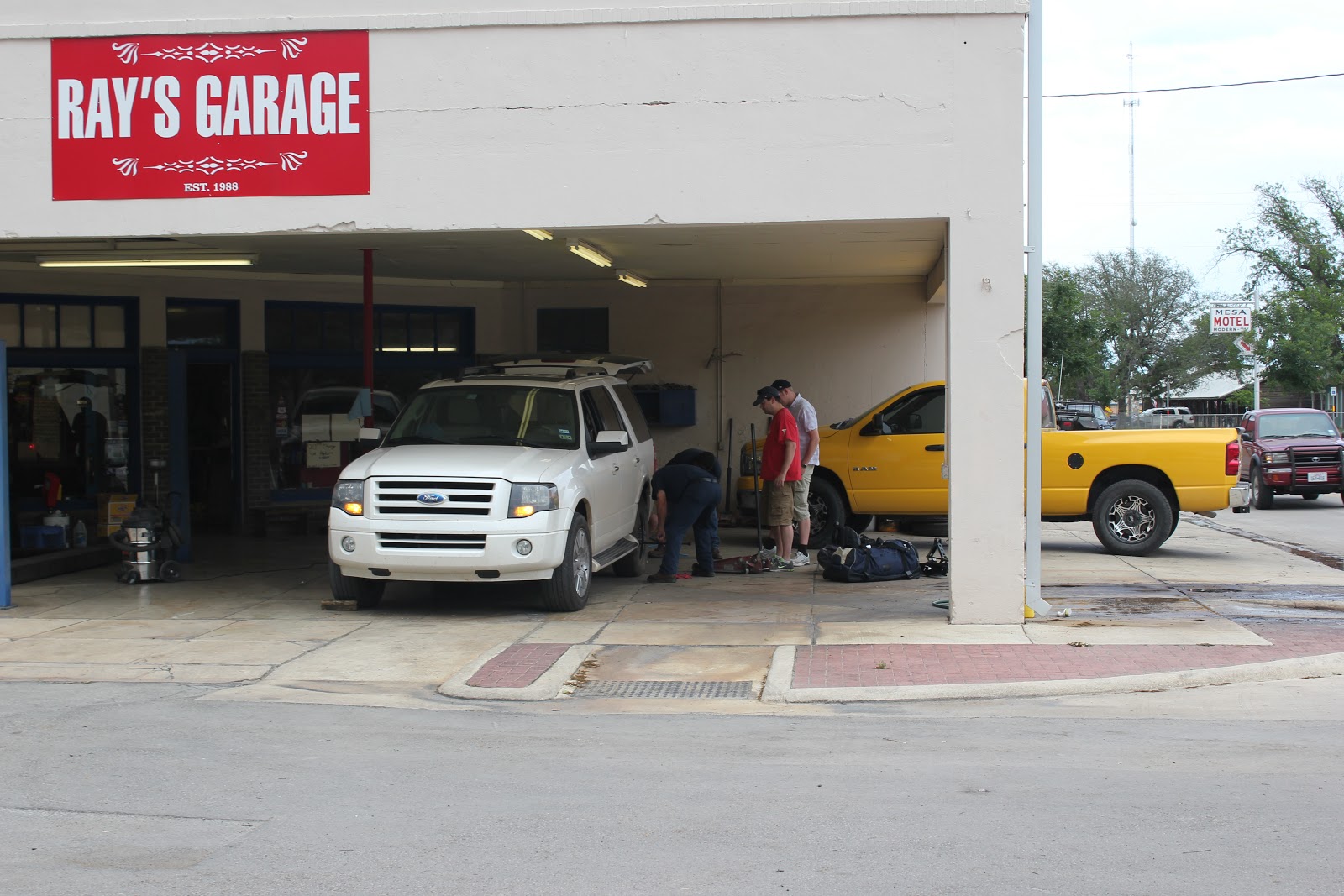 Tyre fixed, we decided to head south towards Uvalde (TX) as a nice line of thunderstorms were developing in an W-E orientation, which began to show signs of producing a potent outflow boundary on their southern flank. En-route to Uvalde (TX), we drove through the edge of a core to our east, with some very heavy rain, frequent lightning but not a lot in the way of hail - at this stage. Temperatures dropped from 82/83F (28C) to 64F (18C) from outside to inside this cell.
Keen to get ahead of these storms, we headed south from Uvalde (TX) - very nice looking town by the way - to La Pryor (TX), passing Mike Bettes who was broadcasting live to the Weather Channel on the side of the road.

It was along this stretch of Highway 83 that we encounted a strong gust front, with dust being kicked up off the field and visibility significant reduced. There was some evidence of rotation amongst all the dust being kicked up, leading us to believe that there could have been a landspout for a short period of time. Trying desperately to get ahead of the outflow, we tracked east from  La Pryor (TX) towards Batesville (TX) on Highway 57, whilst the storm continued to strengthen and travel southeastwards, leading to the conclusion that somewhere along this road the core of the storm would cross in front of us. Initially the warnings on this storm were for quarter size hail, but with each new warning being issued the size of warned hail continued to increase to golf ball and then baseball.

Keeping a close eye on the radar as we started to enter into the RFD (rear flank downdraft) of the storm, a good call from Todd to stop just ahead of the core made us avoid some very sizeable hail. We had plenty of rain, but literally just over 1km down the road there was golf-ball sized hail littered all over the ground - we had a very lucky escape since had we carried on driving we would have obtained some significant dents in our chase vehicle!

With the storm now ahead of us, we chose a route southeast, following the hail core of the storm with the road and verges continuously littered with large hail and tree shreddings. We stopped briefly in Pearsall (TX) to observe a hail-damaged sign, before taking the decision to try and get ahead of the storm once more, diving south on the I-35 to Cortulla (TX) then east on 97 and 72 to Tilden (TX).
This part of Texas is swamped with natural gas and oil drilling, with tonnes of lorries passing along these roads from plant to plant. The storm was once again crossing the road ahead of us at Three Rivers (TX), and given the past history of it's hail we decided to hang back and wait a while to let it cross in front of us. It was starting to flash like a good'un as things started to get a lot darker deeper into the evening.

We eventually crossed to Three Rivers (TX) where there was a lot of flooding, but no real signs of any hail. Heading south on the I-37, the storm stopped producing lightning and died on radar very quickly, so we headed back to Todd's house for the night in Portland (TX), near Corpus Christi (TX).

May be a chance of an afternoon/early evening thunderstorm down in this part of Texas tomorrow, but the next few days look pretty quiet sadly!
Posted by Dan Holley at 08:53